You may have recently come across the memes encouraging thanking the bus driver. There has a recent surge in these surprisingly wholesome meme, but nobody knows where it started. Some reports have pointed to one former light-rail worker on twitter bringing it to our shores by encouraging passengers to engage in the simple common courtesy, with the likes of Russell Crowe backing him up. Since then, the local comedy site “Brown Cardigan” proliferated dozens of the memes, with my personal favourite being the seagull yelling “cheers mate” at the bus driver.

These memes have had a great effect on the morale of bus drivers by causing a recent surge in people actually thanking bus drivers too. Friday’s edition of the Australian featured one very smiley “Charles Everett” from Marrickville being pleasantly surprised by all the additional praise. 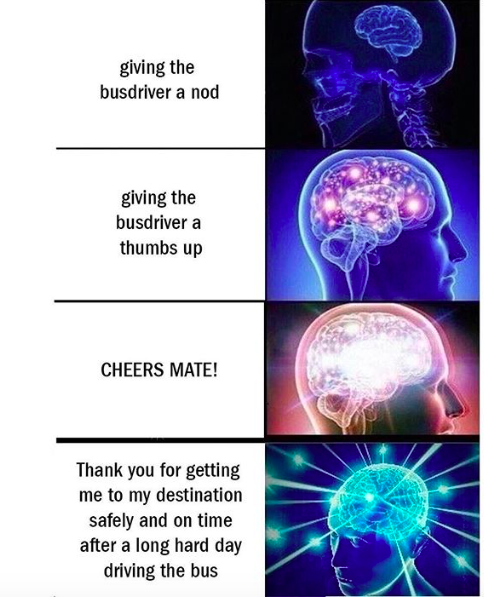 These memes and the resulting positivity being directed to bus drivers is certainly a heartwarming story. As a daughter of a former bus driver myself, I know all too well that the rewards in menial labour are few and far between, and that for anyone trying to get through the hard slog in order to provide for their family this simple acknowledgement can make all the difference.

How does this apply to work?

It is easy to generate a similar effect in your own workplace. The effect of a simple thank you in general has been shown time and time again to boost employee morale, increase engagement and, in turn drive up productivity. This is much more achievable in a team-based setting, and certainly doesn’t require a viral social media following. Make a point of rewarding your employees for the achievements they may make. Even when there is no specific noteworthy mention to make, say thank you genuinely every day for the time your employees contribute to your office. Remuneration isn’t enough, employees need the feel like they matter and their work is valued to be engaged at work.

Some practical ways to thank your “bus drivers”

Encourage your employees to also call out the achievements of their coworkers by holding a weekly “call-out” meeting. You can also import gifts into workplace chats like Slack so that employees can gift each other with small rewards or favours such as cups of coffee or lunches.

For particularly significant achievements, like being named small business of the year in your field for example, hold larger parties to acknowledge the efforts of your employees. And of course at eofys and christmas, hold the traditional celebrations to both thank your employees and give them some time to let their hair down.

So, to increase the good that this meme is doing, take a lesson out of it’s book and remember to thank your employees at regular intervals. And indeed, in the immortal words of Principal Skinner, “Hail to the Bus Driver, Bus Driver Man”.

WooBoard is a peer to peer recognition platform where your employees can send public messages of thanks and appreciation to their colleagues. Sign up for your free 14-Day Trial of WooBoard today.